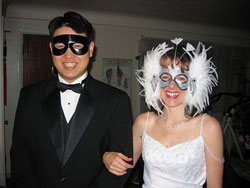 Ah Halloween, the one day a year that people fund dentists their job securities dress up in costumes and pretend to be someone—or something— else. I’ve never been much for costumes, except when I was young because it meant I got free candy. As I grew older, I couldn’t go trick-and-treating unless I got dirty looks from people, so the costumes lost their appeal to me. But being married to Jennilyn comes with a young-at-heart spirit, so here I am getting in costume with Jenni at the Portland Swing Dance Club masquerade dance.

In celebrating our six month anniversary, we went to the dance at Norse Hall in our bride and groom attire, with some masks to hide our identities. Our friends in the dance community smiled and were very happy for our celebration.

Halloween this year is anti-climatic, but I’m not troubled by it at all. Jenni and I have had a long weekend bouncing around so we look forward to a quiet, peaceful Halloween where maybe some neighborhood kids from our apartment complex will visit us for treats—like carrots and celery.

Did a quick update to put our photos online. Had a great time this past weekend hanging out with Jennilyn for almost four days straight. Nothing better to end the visit than pumpkin carving. She was kind enough to give me a slimy handshake while we carved. This is the best pumpkin I’ve messed with. Funny faces…

Note: this post refers to our previous design of www.davidandjennilyn.com.

After a few more tweaks and changes, I’ve added our wedding information page in preparations for our “Save the Day” e-mails which have this web site’s URL printed on it. Most of the site’s content is to come but I wanted to get our site up.

Site Design Getting Closer to Completion

Note: this post refers to our previous design of www.davidandjennilyn.com.

Amazing what inspiration can come from one source then another then another. I worked on this layout for many hours late into the night before a work day and was dissatisfied with how my paper prototype translated on the screen. Then after some feedback from Jennilyn and Clark, I grew to like it, especially after making the colors more consistent.

I also found a cool css rollover trick that got me to incorporate the design element I’ve admired from Adobe’s CS product packaging. The trick is pretty slick because it allows me to create a rollover using purely css, no javascript, and is quick. The idea behind is when someone hovers over the image, the lower image is ‘shifted up’ on-the-fly. This also alleviates the problem of preloading images so people don’t see blanks when the rollover image hasn’t been loaded. An example of one of the images is shown to the right, it used to be the “Photos” background, but I used the current one instead because it allowed me to use white lettering to better balance the entire navigational graphic.

Just Another Clark Kent with a Wonder Woman

It’s funny how creative things can get. Jennilyn and I have been trying to figure out what to do for our “Save the day” pre-invitation message to our friends who may need additional time to secure vacation and/or flights to come to our wedding. I remembered an idea I had about having a string tied to Jennilyn’s left hand, so that her engagement ring would be a visual indicator of our upcoming celebration. The string would represent remembering something important and special, and her finger would be pointing to our wedding day. END_OF_DOCUMENT_TOKEN_TO_BE_REPLACED