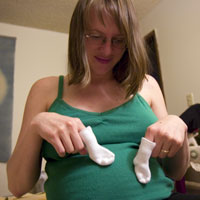 We finished up the rest of the items the baby will need on Saturday. We picked up some socks and were just amazed at how small they were. Then again, everything was small—from the shirts, pants, and caps. I guess it’s good that they’re small, otherwise the baby would have a hard time getting out of mommy. END_OF_DOCUMENT_TOKEN_TO_BE_REPLACED

END_OF_DOCUMENT_TOKEN_TO_BE_REPLACED

Here’s another movie of Rachel’s boys and our trip to the Oregon Zoo. We originally planned to hit the Children’s Museum, but the nice lady at the admission desk warned me that it’s really meant for toddlers through 7 year olds. Yikes. Good to know (Luke, Jesse, and Stephen are ages 8-11). So we walked across the parking lot and spent a fun afternoon at the zoo instead. END_OF_DOCUMENT_TOKEN_TO_BE_REPLACED

END_OF_DOCUMENT_TOKEN_TO_BE_REPLACED

For the past couple of years, my friend Rachel’s boys have come to Washington for a summer visit. Being that they live in Montana (sniff sniff), I was granted the opportunity to take them out for a day of fun while they were here visiting family in our neck of the woods. The following is a movie of our trip to the Oregon Museum of Science and Industry, aka OMSI.

A year ago in August, we flew to California for our cousin Kevin’s wedding. Since I’ve completed my scrapbook projects for now, I’ve been editing video projects that have been on the back burner, obviously, for a long time. So the following movie is our adventures misadventures in trying to rent a car upon our arrival at LAX.

Gain Some and Lose Some

Well, you’ll notice that our blog is a bit… emptier now.

I had been wanting to clean up our desktop computer (which is our blog server) since it was having problems rendering Jenni’s video projects. I thought I had taken all the necessary backup measures but I missed one. And it was a big one: our blog. I backed up all the graphics and templates, but forgot to backup the database which had all the content.

So now, I’m retracing through Google’s cache and an old backup I have from December 2006 to see what data I can recover.

Sigh. I was hoping for an easy Sunday afternoon.

But we’ll have some exciting video to show on our blog soon.