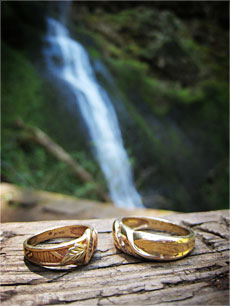 For our third wedding anniversary, we had planned to visit Silver Falls and spend a night at a rustic cabin, but due to health circumstances, we were unable to go.

I think it was better that we went this year, for our fourth anniversary, since we were able to go without a baby and spend two wonderful days alone together (thanks to Jessica and Jenni’s parents for watching Kadie last minute).

Oh yeah, Jennilyn was very, very proud of the photo on the right. And she should be 😉

Our friends Brian and Rachel in Montana gave us a book called “101 Nights of Great Romance” as a wedding gift and we’ve enjoyed taking its ideas to try new romantic adventures. For our anniversary, Jenni and I each ripped a page out from the book. I picked one that seemed harmless enough, titled “The Newlywed Game,” but it required me to get out of my comfort zone.

Still, in reading of the romantic acts prescribed, I knew Jenni would appreciate the gesture and anything that would make her happy is worth it. Also, I’ve learned from several life experiences that anything that I know to be good and makes me nervous, is something I should do. Easier said than done, of course.

On the morning of our anniversary, I got up early for prep work. I took a bag of empty but noisy pop cans to the garage, where I proceeded to figure out how to get pop cans tied together. I decided to go with stringing them serially with twine and making a loop that would tie to the trunk.

After several failed attempts of puncturing the bottom of a pop can with a screwdriver, knowing that Jenni was probably still asleep above me, I did the next noisiest plan: drilling holes. Thankfully, Jenni was already awake and getting ready as I drilled holes into thirty-odd pop cans. My hope was that they would stay tied to the car, after all, the day prior was Earth day, and I didn’t want to be littering. Man, they made a racket…

Next, I took some window markers (the same ones from our wedding coincidentally) and wrote on the rear windshield and the two rear windows. Here’s the final result: 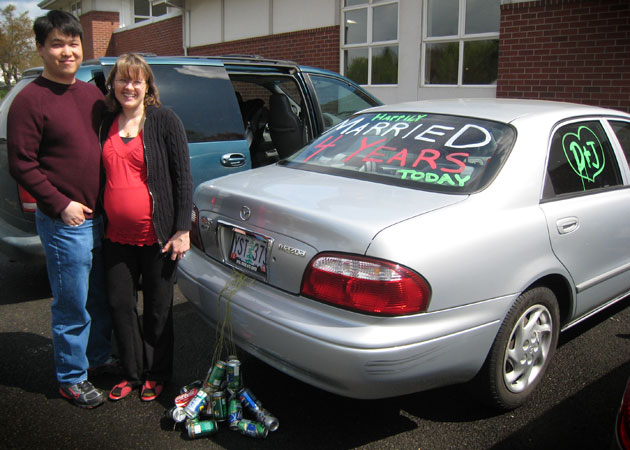 I hate being the center of attention, so driving our car all decked out was initially nerve-racking. I felt like everyone on the road was staring at us. Jennilyn remarked, “You’re just setting an example for other husbands.” I wasn’t convinced that other husbands were necessarily inspired by our car decorations.

After we dropped off Kadie with Jessica, we stopped by Burgerville and had a few honks along the way. A nice gentleman complimented our car and I started to ease up on attracting attention. I figured, in a world where negative messages are broadcast loudly and daily, perhaps our small advertisement and encouragement for happy marriages would be a nice song in a world of noise.

When we arrived for dinner in Silverton, a stranger congratulated us by giving us two tickets to a live music event for the evening. It was a gracious surprise and made me glad that our car was decorated or else we would’ve missed out on dancing to live music from Bugs Henderson, a guitar legend from Texas that we’ve never heard of.

One more thing, the pop cans, despite my drill-job design, did not make it very far on I-205 on the way to Silver Falls before flying off. Only one can made it through the entire trip.

The weather reports had led me to believe that we would have a wet time at Silver Falls. While we did have a wet time, it was not because of rain, rather it was from the falls themselves.

We first visited South Falls because it was on the way to our cabin. It’s one of the four water falls that you can walk behind. It was a brief and steep hike down, but the view was great. I brought out the neutral density filter and managed to get a few shots of the falls looking very smooth.

The second falls we visited was Winter Falls. It had less water flowing compared to South Falls, but I found it intriguing being able to get very close to the base of the waterfall without getting too wet.

For the last waterfall, we only were able to view from a distance, but we will definitely visit the next time we come. The North Falls was beautifully tucked away in thick forest.

We had a wonderfully relaxing and scenic time visiting Silver Falls. Hopefully, after this second baby is old enough to stay with our parents, we’ll be able to return for another visit. 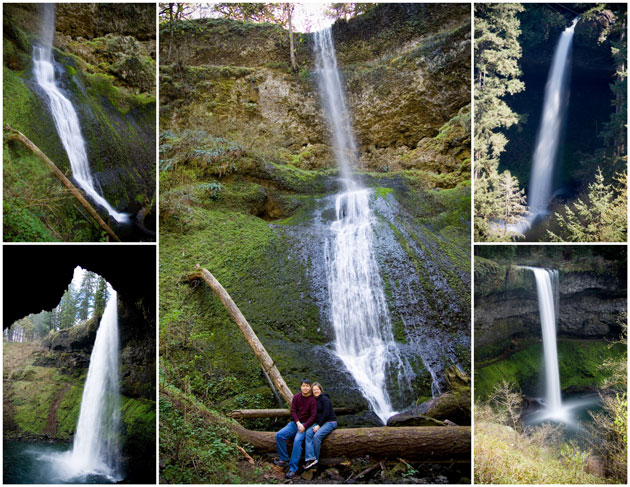 One Response to “Silver Falls”

More from "Straight to True North"